Well, Quincy is back.  I mean, minus the eyeballs.  But, his demeanor is certainly back.  Maybe too much.  I mean, how do you tell a dog to just chill out and lie down?  You've still got stitches, dumbass!

Day 1, night 1 and most of day 2 were really hard.  QP was in obvious pain.  Crying, whimpering, panting.  It was tough.  We didn't sleep that first night.  Vet gave us some new pain meds.  I gave those to him immediately on Day 2.  Shortly after, he conked out.  That evening, while still a bit drunk, he started to bounce back.

Saturday and Sunday, fugetaboutit.  The dog won't sit still.  He'll occasionally start panting randomly.  But outside of that, he seems to be his old self.

Unfortunately, in his cone of shame, he is having a hard time getting around.  He can't feel his way around and the cone messes up his hearing...he can't tell where we're talking to him from.  This doesn't stop him from walking around all day and running into things.  He really hates the cone.  We've been taking it off once in a while, when he's lying down.  But, his stiches are getting itchy.  So, that time has become very limited.  But, despite the cone and the fact that he has no clue where he is going, Quincy insists on walking all over the house, getting lost and then whining for us to come get him.

Seriously...I can't find a purpose to his exploration.  He'll find his bed, he'll find his crate, he'll find his food...but, he won't do anything with them.  Maybe he's just exploring.  But, seriously...someone teach me how to speak dog so I can convince him just to lay his ass down and get some rest while his surgical wounds heal!

Ok, so despite my complaining at the constant clicky clack of nails on hardwood by a dog who should be resting, this whole thing makes me really happy!  The first night, I was nervous.  I thought I had put my pooch through more pain than was necessary.  But, now, now only am I happy that he appears to be bouncing back, but I am wondering if there may, in fact, be some improvements.

For example...we've suspected that Quincy is also mostly deaf.  We can call him, but he has trouble identifying where the sound is coming from.  Like, I would be on his right, I would call him and he would turn to his left...almost like he only had one working ear.  I would have to shout commands like SIT.  And...he completely stopped noticing knocks at the door.

Well, today, as I am working from home, sitting at my usual spot at the dining room table and drinking my coffee, I set my coffee cup down on the table with it's usual mild *thunk*.  And Quincy went nuts!   BARK BARK BARK BARK BARK...while trying to figure out which way he was supposed to go to attack the intruder.  He hasn't done that in a long time.  And, the thunk wasn't that loud.  This happened twice today.

Could all be in my head.  But, regardless, it makes me very happy to see him recovering so well.  This process cost us a lot of money.  And, as much as I love my dog, the practical side of me was worried that it would only make things worse or that he would still only have a few months.  But, so far, I am seeing my old Pants come back to life.  The goofy faced, stump shaking, needy little bastard that he is.

Here are some pics, in case you are wondering.

This is what we were dealing with before: 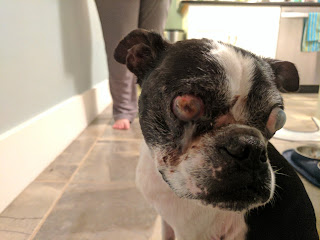 This is post cat scratch.  As a refresher, it was his left eye we were originally going to have removed.  The bulgey one.  Then the cats happened and his "good eye" became the worse eye. 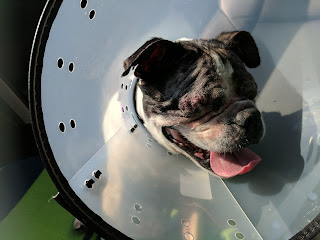 Taken after I picked him up post surgery.  He was much more energetic than I expected.  My guess is that he was probably a little freaked out and happy to see me. 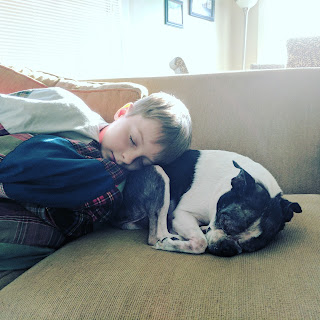 Desmond has felt pretty bad for QP this whole time.  But, now that he is showing his old self, Desmond is adjusting well to his eyeless pooch. 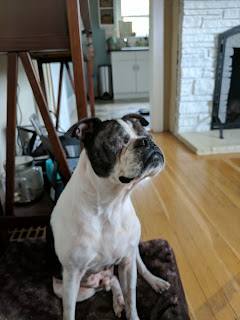 This is from this morning.  For the 15 seconds I got him to stay on his mat.  Shorty after this, he was moving around again and I threw the cone back on.  His new Halo arrives today.  That should help him out, as well.  Good thing he doesn't have eyes so he can't see how ridiculous he looks in it.

Yes...it looks a little bit "American Horror Story."  But, as the vet said, it's purely cosmetic and is a bigger deal for us than it is for him.  I do miss his eyes.  They had personality!  But, I am happy he's not living with a constant headache, anymore.

Now if only he will sit still long enough for them to fully heal!!