I think everyone mostly agrees.  2016 was pretty stupid.

There were some bright spots!  Kim and I spent (another) week in Hawaii to kick it off.  I started work at one of my favorite companies on the planet.  Baby Owen popped in the oven.

What else?  Hmmmm...can't really think of anything.  I'm sure there is something.

Here are my lessons from the past year:

So, there you go.  I am optimistic that 2017 will be better for everyone.  That is, unless Trump kills us all.

Peace be with you!

So, about not telling anyone the baby's name...

Now, first of all.  How did we come up with this?

Owen is Kim's dad's middle name.  So, that one was easy.

And, since Kim got her pick which pretty much breaks all my rules for naming (uncommon but not made up and no namesakes), I pretty much bullied her into giving me the middle name.  So, I picked Aloysius.  And she said no.  So, I went with my next favorite Jesuit Saint...Francis!

I'll be honest...Kim still doesn't love Francis.  She says it's growing on her.  But, it's taken some whining on my part.  Francis is the name of some very strong men and very important people in the history of the Catholic Church.  St. Francis of Assisi (patron Saint of animals and the environment), St. Francis Xavier (founding member of the Society of Jesus, the Jesuits, patron Saint of Catholic missions and considered to be one of the greatest Christian missionaries since St. Paul) and Pope Francis.

To this day, I credit Gonzaga with helping me grow as a person; to leave my small town mindset behind and to embrace the broader world with more acceptance and love.  Gonzaga helped me become who I am and I hope to pass many of those values on to my sons.  To me, this is a way of honoring the Jesuit tradition.

Now, that is also a perfectly acceptable name.  And, as the patriarch of the Pankow family and a very good man, he is a worthy person for whom to grant a namesake.

But, Grandpa already has 2 grandkids with middle names of Frederick.  I'm one of them.  The other is my cousin David.

So, I really prefer to stick with Francis.

Now...remember how, in the post where I said we weren't going to tell people, I mentioned that the reason is because people get so judgy.  Well, I was right.

"Frederick sounds so much better than Francis."

"Think of what it would mean to your grandpa."

"You should really go with Frederick instead of Francis."

Not to mention RUDE, people!

Francis is a perfectly acceptable name.  It's not like we're naming him Spaghetti or Ikea.  If you want to complain, do it behind my back like I do when kids have a weird name.  Although, I stand by my feeling that Francis is not a weird name.  In fact, it is a very strong name.

And it's a middle name!  Who really cares about anyone's middle name?

So, the next time you are considering telling me how you feel about my son's middle name, remember that I didn't ask for your opinion.  If you ask what his name is, I will tell you.  If you ask me where it comes from, I will tell you.  I don't need you to passive aggressively tell me how it's not that good.  You don't even have to tell me you love it.  But, if you give me your opinion, be prepared to hear my opinion on the state of your manners.

"Behold, a virgin shall be with child, and shall bring forth a son, and they shall call his name Emmanuel, which being interpreted is, God with us." 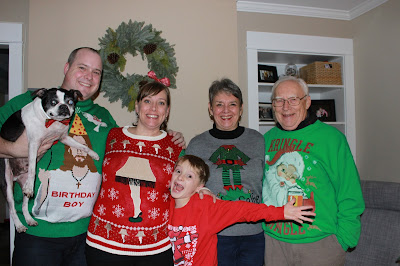 Sadly, this past weekend, my Grandma Joyce passed away.  She was 93 years old.

While sad, this wasn't unexpected.  Doesn't make it suck less, but it wasn't a surprise.

Grandma had pretty severe Alzheimer's.  The last time I visited Michigan, a little over a year ago, she didn't recognize me.  The time before that, she recognized me, but that's about it.  She couldn't remember the conversation he just finished having.

And now she doesn't have to suffer through that, anymore.  As a Christian, I know this is amazing for Grandma.  However, I am very sad for the family.  Especially my Grandpa, to whom Grandma was married for 70 years.

And, finally...here is one of my favorite pictures.  From our visit to Michigan shortly after Desmond showed up.

I'm grateful for this time I get to spend with Grandpa and with the Michigan family.  Aunt Colleen (Dad's sister) and Uncle Dave have been amazing.  I can't imagine all that they have had to go through these last years.  Aunt Colleen was by Grandma's side when she passed.  I am very grateful for them, as well.
- December 21, 2016 No comments:

Do you remember doing research projects in 2nd Grade?  I sure don't.  I also don't remember having to do an oral report on my research.

Well, that's what Desmond's class is required to do.

Anyway...Desmond takes after me in a lot of ways.  One way being that he hates doing any type of homework.  So, this has indeed been a bit challenging.  However, we were able to crank out some solid research.  AND...we were able to do research in more places than simply the internet.  I know the internet is a perfect place to do research.  But, I also think it's important to remember how to use a library.  So, Des and I spent some time looking at the encyclopedia (remember that thing?) and learning how to use the "card catalog."  I put it in quotes because it's not really a card catalog anymore.  It's a computer.  Man, kids have it easy, nowadays.

Come to think of it...so do librarians.

For the record, Desmond's favorite part of the encyclopedia was that, when all the books are together, the spines of the books form a large picture.

Fast forward...we collect our information and we get to work.  Part of the oral presentation includes visuals.  What kind of visuals should Desmond provide?  This part was easy:  Legos!

I should point out...this isn't the full presentation.  Just a quick practice after he finished his models.

Desmond wants me to make it VERY CLEAR...he built these models by himself without instructions.
I don't know if this is standard for all 2nd graders or if it's an OLG thing.  Regardless, I am pretty impressed at what these kids are capable of at such a young age.  When I was in second grade, I was still getting in trouble for eating paste.