My dad is cooler than your dad.

A few months back, my dad started a pretty rad routine.

One day, I received an email titled, "Sideways Stories from Wayside School Chapter 1."

I open up the email to find an audio recording of my dad reading a chapter from Sideways Stories From Wayside School.  I don't think he knew at the time, but this was a book I thought was pretty hilarious when I was a kid.  Regardless, he picked a good one.

Desmond loves being read to at night.  It's one of his favorite things.  In fact, he gets really bummed when he doesn't get a story.  There have been plenty of nights when he has had to forego stories because he spent too much time playing video games or farting around.  So, he's gotten pretty good at wrapping things up when he knows it's getting late because he doesn't want to miss his story time.

So, when Grandpa started sending stories, it fit right into the nightly routine.  Now, every single night Des is home with us, we curl up in his bed and hit play on the latest chapter.  Basically, it's our nightly audio book as narrated by Gary Pankow.

Not that long ago, we finished Sideways Stories.  Did you know it has a sequel?  I didn't.  Not until Desmond told me.  "Do you think Grandpa will send the second one?"

Sure enough, once we finished book 1, Grandpa started sending chapters from Wayside School is Falling Down.  Lately, he's even been including photos of the chapter pages so Des can see the pictures.  As you can see, Marley gets to enjoy the stories as well.  I'm also saving all the Chapters for Owen to enjoy when he's older. 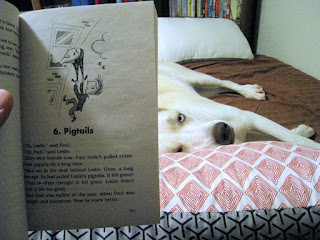 Desmond has become quite the reader in his own right.  Many nights I have had to pop in his room and tell him off because he's still reading at 10 or 11 at night.  One night I had to go in there at midnight (it was a weekend, but still)!  I am pretty sure he gets it from his Grandpa.