Reading Charlotte's Web with Desi. Just read the chapter where Wilber learns the farmer plans to kill him when he's bigger.

Desi: "Why are they going to kill him?"

Me: "Because they will eat him."

Desi: "Why would they eat him?"

Me: "Because some people eat pigs."

Me: "Did you know bacon is made from pigs."

We decided to sign Desi up for T-ball this year!  AND...I decided to coach!  A little nervous about it.  But, what could go wrong?  I mean, it's just 12 four and five year olds.  Not like they can get out of control or anything, right?

Email ThisBlogThis!Share to TwitterShare to FacebookShare to Pinterest
Labels: Life with a kid, sports

There are many paths to Heaven


So...I dragged Desi to church this weekend.  He's not a fan, for obvious reasons.  Anyone who remembers going to church as a kid knows why.  It's boring as hell...wait...I mean, it's boring.  Even as an adult, church bores me.  I currently really like my church because the priest is great and tends to deliver an ear catching sermon.  But, Desi doesn't care about that crap.  He wants to play Angry Birds.

Anyway, this church is really tolerant of kids.  At many churches, you can hear the grumbling around you when a kid gets antsy.  And, let's face it, what 4 year old would not get antsy when forced to sit quietly during an event which doesn't once refer to Batman or fart jokes?

My church has these little doodle pads in the pew for kids to use to draw on.  Desi wanted to draw on one.  Actually, he drew on 3.  There were none left in that particular pew for future kids.  Not very Christian of him.  Whatever. 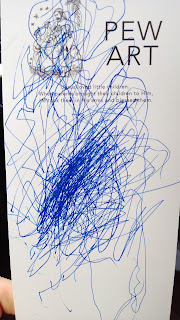 After scribbling, he shows me his masterpiece.  "What is this?" I ask.

Desi: "I drew a map!  It's a map to heaven."  He is showing me how the lines end at the picture of Jesus and the children. Then he goes on to say, "See...there are many different ways to get to heaven."

I thought this was ridiculously profound and I had to keep the scribbles.  For those of you that ever talk with me about religion, you know that I am not a "You must agree with me or you're going to hell," kinda guy.  I am Catholic, but I would never ever tell you that my way is the only way and that my faith is the only faith.  In fact, I will tell you that I am pretty sure the Catholic church has it wrong it certain places.  I choose this faith because it works for me and helps put me on, what I believe, is the right path to heaven.

Now...someone else, say a Mormon or a Muslim or an Atheist, might take a different path.  That's right...I'm including you non-believing heathens in here as well.

I don't think God expects us to know all the answers.  This isn't a history quiz.  If it were, God would have given us much clearer instructions.  Basically, he left us nothing.  Some might say he left us the bible.  I would say bogus.  He left us a bunch of people that wrote down a bunch of things that were put into a book.  God giving us the bible would mean God literally threw a book down from the heavens and told us to get reading.  As far as I know, that's not what happened.

Because God hasn't given us all the answers, I believe, he does not expect us to get everything right.  He expects us to do what's right.  What's right, you ask?  Well...love your neighbor.  Help those that need help.  Don't judge other people.  You know...all that liberal hippie stuff.

There are many paths to heaven.  What's yours?

Email ThisBlogThis!Share to TwitterShare to FacebookShare to Pinterest
Labels: Conversation pieces, Life with a kid, Religion

We are all marathoners

I just read this article and it resonated with me.  But, not for the reasons the author mentions.
Everything he says is true.  Running a marathon is hard.  It's damn hard.  It takes a lot of work and a lot of strength.  But, even more than that, it takes a strong will and a determination to succeed.  I have now run 2 half marathons and 2 full marathons.  My times would certainly not qualify me for the Boston, but I am very proud of myself nonetheless.  IMHO, I have every right to be proud.

When I have run races, the courses are filled with people cheering me on.  I don't know these people.  Chances are they are there for someone else.  But, it doesn't matter.  They are cheering for me, too.  They are holding up signs like, "Worst parade ever," or, "Runners are sexy," or, my favorite, "Keep going, Keep going!  That's what she said."

They are giving me high fives!  Telling me what a great job I am doing dispite the fact that I look like death.  They smile at me and often get me to smile back even though I just want my legs to fall off.  When I am done, they tell me what a great accomplishment it was and how proud they are of me.  Strangers.  Strangers tell me how proud they are of me.  When I finished the Goofy Challenge, I got a hug from a fellow runner.  A person I have never met. We congratulated each other and moved on.  It was wonderful.

Some people suck.  But, it's only some of them.  The majority of people are amazing.  They cheer you on.  They help pick you up. They hug you when you succeed.

My son stiffles my creativity

Desi has a tremendous imagination.  I love to watch him play with his toys.  Action figures, stuffies, whatever.  He is really great at playing by himself and creating worlds to play in.

However...when I play with him, I get nothing but rejection!!!  Let me give an example.

Last night, Desi asked if I would play with him during bath time (meaning he's in the bath and I am kneeling outside the bath, perverts).  I said sure.

He has a collection of superheroes that he plays with in the bath.  Recently a couple of Transformers were added to this collection.  Apparently, the super heroes (which for this run consisted of Wolverine, the Flash, Batman and Hawkman) were supposed to be trapped on a raft in the middle of a poisonous ocean.  One of the Transformers, either Optimus Prime or Bumblebee, neither of whom transform into boats, for the record, would save them.

Okay...so here's what went down.  I was playing the role of all of the super heroes.  Wolverine was trapped on the raft.  His super-friends (one of whom can fly and another of whom has a both a boat and a helicopter) are standing helplessly on shore hoping someone will save their friend.

Then...Optimus Prime, in transformed position, races, underwater, to the raft and rescues Wolverine!!!  He takes Wolverine back to the shore to be with his friends!

Here is where I decided to improvise a little, because I am creative like that.

Expecting Bumblebee to dive in, I was shocked to hear, "NO DADDY!  That's not what you're supposed to do!  He has to be on the raft!!!"  At which point, Desi goes all diva, breaks character, removes Batman from the bath, puts him back on the ledge and proceeds to instruct me to put Batman on the raft so he can be saved.

I mean, come on!  Clearly we have established that the Transformers can drive underwater.  What gives?  I can't work under these conditions.
- April 15, 2013 No comments:

Email ThisBlogThis!Share to TwitterShare to FacebookShare to Pinterest
Labels: Life with a kid, Playtime

Desi: "Daddy, when can we have artichokes for dinner with pickles and chicken?"