If you don't love Baby Yoda, you are dead to me!

I hope everyone is watching The Madalorian.  You don't even have to be a Star Wars fun.  Just watch it for one thing:  Baby Yoda.

I've been saying for a while, Baby Yoda = Owen Francis.  He doesn't listen, he's a bit sassy, and he's really damn cute.

I've been loving the fan made movies involving Baby Yoda.  Here's one that I just found that is AMAZING and TOTALLY Owen Francis.

Email ThisBlogThis!Share to TwitterShare to FacebookShare to Pinterest
Labels: Owen, Things That Make Me Smile

Check out this dog

So...we did something I wondered if we would ever do.  We got a freakin' dog!!!

Allow me to introduce to you...Bernadette Peters Pankow!

Everyone knows that Quincy Pants was my boy.  I won't lie...I still miss that dog.  But, let's be real.  Blind, deaf, allergic to humans...he was high maintenance.  So, when he passed away, not only did I need time to mourn my best buddy...but, we needed a break.

Also, there's the little fact that dogs are messy and my wife is a neat freak.

It's been at least a year, probably a bit more, that I have been not-so-subtlety hinting that I would like to get a new pup.  Desmond, as well, has been asking when the time will come.  And Owen...well, this kid LOVES puppies.

I'm not sure when exactly it happened, but at some point, Kim started expressing an interest in Doodle breeds.  Now...I have never really liked Doodles.  I don't like the course fur (but, the no-shedding is a major plus for Kim) nor do I like how trendy they are.  Everyone, nowadays, is getting a Doodle of some kind.  Labradoodle, Sheepidoodle, Cockadoodle (that's a cockapoo/Poodle mix), the list goes on.  However...as I said to her, if it gets me a dog, I can learn to love a doodle.

Then, she introduces me (Kim introduces me...I didn't find this) to the Bernedoodle.  A Bernese Mountain Dog/Poodle mix.  I love the Bernese.  Big, fluffy, smart, etc.  We have some friends that have one and I think the dog is amazing.  Kim shows me this Bernedoodle breed and I am intrigued.

On a couple occasions, she would say to me, "OMG, Look at this puppy!  I want her!"  But, it was never the right time.  We have a 2 and a half year old who STILL doesn't sleep in his own bed all night.

But then...something changed.  Kim shows me this picture: 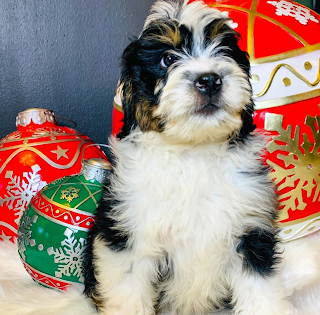 Along with a caption about how this sweet girl is the last left in her litter.  Kimmy must have thought she was lonely or something.  Because we decided to go meet the breeder.  But, we weren't going to get a dog.  I am going out of town this weekend, we have Christmas, we still have a toddler and we're going on vacation in the spring.  Let's just go, meet the breeder, see the dogs and maybe get on the list for a spring litter.

We got there and there is this little furball.  Very quiet.  The breeder said nobody wanted her because she was so quiet.  They thought there was something wrong with her.  Kim, however, LOVES the idea of a quiet dog.

So...somehow, we brought a dog home.

And she is SUPER SWEET!  She's very shy.  We finally heard her bark last night (about 32 hours later) when she didn't want to be crated.  She is a cuddle bug!  She's still getting to know us a bit.  And nighttime is hard (she wants to play at 2 AM), but we'll get there.  She's really good at going potty outside (which is amazing!)  Now we just need to get her crate trained and sleeping through the night.

Anyway...my Instagram followers should expect a lot of puppy photos in the near future. 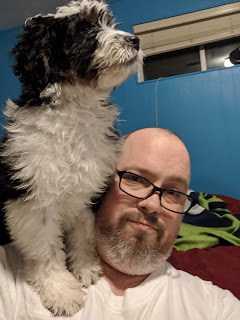