It's Superbowl week!  My Seattle Seahawks are in the Superbowl!  The first team to go to back to back Superbowl since their opponents, the New England Patriots did it back in the year that they did it.  Whenever that was.

I figure this is a great week to write about the Seahawks and why I love the heck out of them!!!

I would like to start with the one and only...Marshawn Lynch!

If you watch sports, you have probably heard of Marshawn.  Or...maybe you have heard of his nickname: Beastmode!

Beastmode isn't a nickname as much as a state of play.  It's what Marshawn calls it when he is able to burst through the line.  When he runs 90 yards across the field for a touchdown.  When he drags defenders with him as he forces his way across the first down marker.

Perhaps you have heard of the famous "Beast Quake!"  A run during the playoffs that got the crowd so fired up that it actually registered on the Richter Scale!


Then...there is notorious interviewing style.  Notorious mainly because of his lack of interviewing.

The good people over at MyNorthwest.com went ahead and ranked his Top 10 interviews for you: http://mynorthwest.com/1046/2692511/Marshawn-Lynchs-10-best-interviews-ranked

Then, there is his most recent interview, done with Skittles!  Check that out here.

Of course, the media hates that he doesn't do interviews.  It's in his contract to do interviews and he doesn't do them.  The league likes to fine him for this.  Oh...and he likes to grab his crotch when he scores a touchdown.  The league likes to fine him for that, too.  Forget that murderers and rapists and wife beaters all get to keep playing in the NFL.  Don't grab your junk, Marshawn!!! 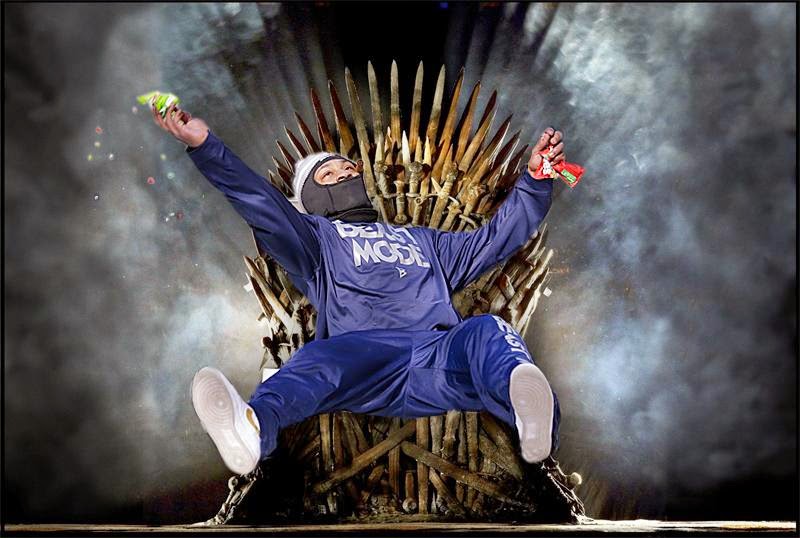