If you have not actually met Quincy recently, you may not realize that he's totally blind.  About 6 years ago (give or take) I started to notice some light spots in his eyes.  Just small dots that, at first, looked like he had a piece of dirt in his eye or something.  Except, it was actually IN his eyeball.  Inside the pupil.  The spot got bigger and bigger.  Finally, about 4 years ago, the cataracts took over his eyes and he become close to 100% blind.  Some light still gets through, we think.  But, that's about it.

Well, recently, he injured one of his eyes.  We suspect he walked, eyeball first, into something.  Could have been a bush branch.  Could have been the corner of the coffee table.  Who knows.  Anyway, it caused an ulcer on his eyeball.  Basically, a large crater on his eye.  According to the vet, it was one very small layer away from rupturing.  We had a few options.  1) surgery to remove repair the ulcer (most expensive option), 2) surgery to remove the eye, 3) medication to try to heal the eye.

The surgery options were about $2k, The meds were $50.  So, we went meds figuring if they didn't work, then we would go with the surgery.

Well, the meds worked...for that issue.

Shortly after, his eye got super bulgie.  Like, Glenn from the Walking Dead bulgie.  If you don't know what I am talking about, go punch "Glenn Eyeball" into Bing.

Doggy eye doc says it's glaucoma.  A high eye pressure is 30.  Quincy's is 85.  Unfortunately, I can't go to the nearest weed store and get him some cannabis for this.  We could try meds for it, but, in the doctors words, "It's a long way to go and I am pessimistic."

They eye is causing him pain. It's pretty obvious.  He pants a lot.  He lies around a lot (more than usual).  He's not his usual happy, barky, "where are my morning pets, dad?" self.  And, according to the doc, there is only one solution at this point.  Remove the eye.

So, Quincy is going One Eyed Willy.  Surgery is on Friday.  It's not cheap.  Especially when my wife's company offers zero maternity leave and mine has decided I haven't been here long enough to give me parental leave.  This isn't a cost we have been budgeting for.  But, my Pants is hurting and that sucks.

I'm sad for him.  He's got such a cute face!  But, I know it will make him feel better.

Now, if only I could get him to wear an eye patch. 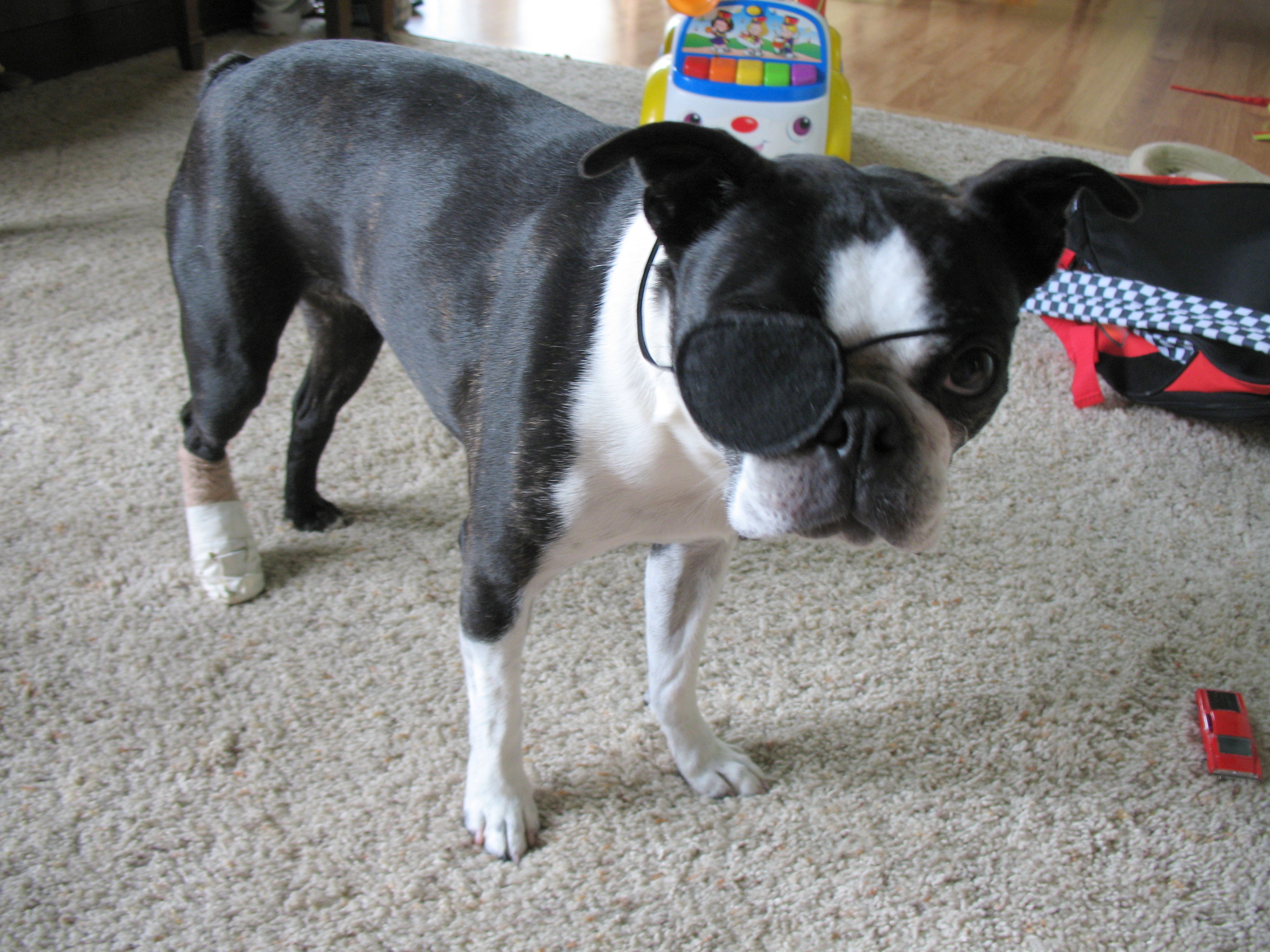 Email ThisBlogThis!Share to TwitterShare to FacebookShare to Pinterest
Labels: Quincy