Welcome to the world, Owen!

So, let me tell you how this all went down.  Pics at the bottom of the post.

It's Monday night.  I am NOT currently in Mountain View.  I am at Swedish Hospital in Seattle with my beautiful wife and my 2 (count them...one, two) sons!

Saturday night, Kim and I were chilling at home.  I had already checked into my flight to San Jose scheduled for the next day and I was procrastinating putting my bag together.  Kim had just come over and kissed me goodnight.  I was going to watch an episode of American Gods.  Kim goes into the bathroom.

Emails sent to my new boss and my recruiter.  Ticket and hotel cancelled (to be rescheduled), forget about a luggage for San Jose, we already have hospital bags ready.  I checked all the boxes to kick off the labor process and spend a few hours at home while Kim labors there.

Contractions progress very rapidly.  Like, really really rapidly.  They weren't lasting a full minute.  But, there were coming within 5 minutes of each other.  So, we opt to go to the hospital.  Worse case, they send us home.

I've mentioned before that I think women are amazing.  If I had to give birth, I would have filed for lifetime celibacy.

We got to the hospital around 10:30 or so.  Right to triage and taken to a birthing suite within 30 minutes.  Kim had an epidural put in around 11:30 or so and things started to calm down.  At that point, the nurse suggested we try to get some rest while we wait for the baby to move down a bit.  So we did.

Around 7ish, the pushing began.

4 hours later, Dr. comes in with forceps.  Apparently, she's an expert with these.

(Side note...Kim's OB, Dr. Oman is pretty rad.  She's young, but she's also no nonsense.  She was totally rad and she's been with us from start to finish, from our original insemination to...well, what's coming up.)

Dr. Oman has the forceps.  But, after feeling around, she's not 100% sure she wants to use them.  It sounds like the problem is that Owen was not turning properly.  The Dr. wasn't able to get a good read on his shoulders.  Was he not turning because he's shoulders are too big?  It is his head?  What's going on?  Regardless, he's not coming out correctly.  We need to take alternative measures.  In her words, we should pick one. Nobody needs to be a hero.  So, rather than attempt forceps, which might not work, her recommendation was a C-section.

So, C-section it is.

Now, I know many people who have had C-sections.  They've been successful.  Happy, healthy babies.  But, it was still scary going into an OR with a bunch of strange people (although, Dr. Oman was the surgeon, which was rad) getting ready to watch your wife get cut open.

But, it went super smoothly!  Dr. O walked us through what was going to happen.  They put the big blue sheet up so we couldn't see what was happening, and they got to work.

A few minutes in, Kim says to me, "I just felt them put an organ on my stomach."  ew.

A few minutes after that, I hear Dr. Oman say, "Dad, do you want to watch your son be born."

So, I stand up.  And there is my son, Owen Francis Pankow, being held by the doctor, umbilical chord attached to him at one end and going into my wife's bloody stomach at the other.  It was amazing.  Then he made his first noise.  Kim and I looked at each other and we were both crying.  I sat back down before I passed out.

I went over and hung out with Opie while Kim got stitched up.   Other than one "battle wound" from the surgery and a bit of a cone head from being stuck somewhere in Kim's pelvis, he was perfect!

Due to the C-section, we get an extra day at the hospital.  Desmond is very excited to have his bro at home.  Shaundar brought him by last night to meet Owen for the first time.  It was one of the highlights of my whole life.  He's came again tonight for a bit to hang out.  He's going to be a great big bro.

That's all I got for you.  Here's some pics!


Right out of the oven. 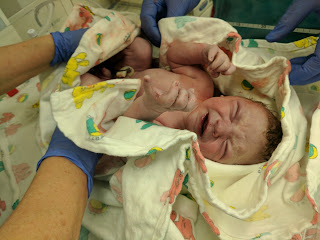 What. The heck, people.  I did not ask to come out. 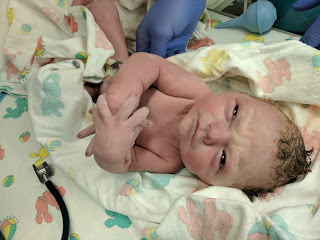 Mama gets to hold her baby for the first time. 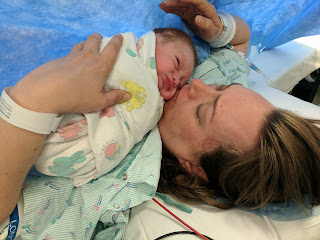 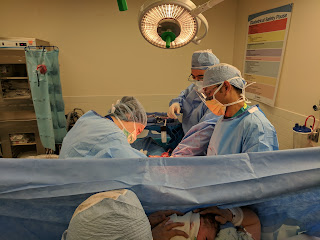 Just don't look over the curtain. 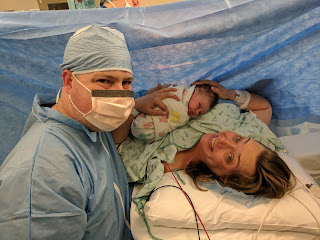 Mommy should be pretty proud of her work. 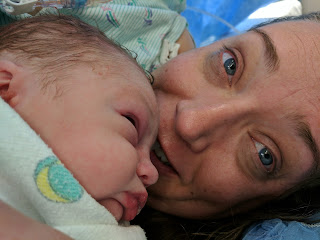 Meeting his big bro for the first time! 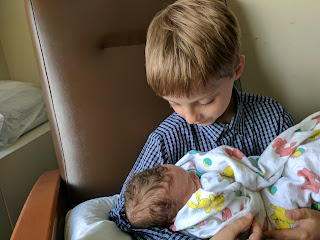 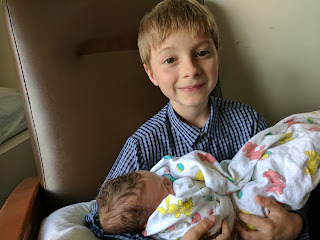 I've got some coming, soon.  This post was started the day we were supposed to leave.  Alas, we had to stay an extra day so Owen could use the tanning bed.  I'll write about that in the next post.  Stay tuned.