My choice has been confirmed!

It's 2 days past election day.  It's no secret to my friends and family and the 2 readers of my blog that I am NOT a Trump fan.  Haven't been since day 1.  I was one of those that knew, KNEW, with every fiber of my being that the Republicans wouldn't be stupid enough to give him the nomination.

Then, I knew that AMERICA, wouldn't be stupid enough to elect him president.  I mean, I knew how deeply the hatred of Hillary ran.  But, certainly we could put that hatred aside knowing that we would be electing a dangerous narcissist.  Remember how much grief we gave Hillary for NOT leaving her cheating, womanizing husband???  HAHAHA!  Of course we're not going to elect this serial adulterer!  A man accused of abusing multiple women.  HAHAHA!!  Of course we're not THAT dumb!!!

Now, here we are...4 years later.  Everything I worried about has come true.  Our allies laugh at us.  Our enemies have been emboldened.  Chaos rules the streets.  Oh, but don't worry...the chaos is only those black people complaining about cops.  Don't worry about those thugs.  If they would just stop committing crimes, they wouldn't get shot. ALL LIVES MATTER!

Oh...and, spending is at record highs, too.

Yeeah, no...they don't.  Votes are still being counted in most states.  5 states have yet to be called by the news, much less be certified by the respective states.  Yes, our Dear Leader has declared victory.  And, his mob has agreed.  They are trying to storm polling places.  They are taking videos of their lemming friends INSISTING that their vote was tampered with.  And, people are eating it up.

The good news is, the data is trending in a direction that should kick this ass to the curb.  But, we know that won't be the end of it.  He's already suing. And, he's not suing to contest results.  He's suing to STOP COUNTING.  Let's flash back to 2000.  The counts all happened, then the recounts.  THAT'S when the lawsuits happened.  After counting.  This is unprecedented.  He is literally suing to disenfranchise voters. This is disgustingly unAmerican.

I want this to be over. 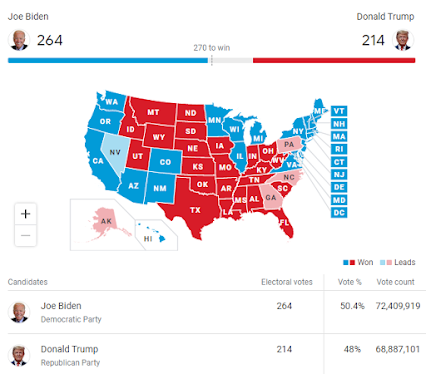 Oh...and I deleted my Facebook page.  More on that later.