Is it time for the GOP to die?

So...I have continued to follow all this post election nonsense.  You know, the nonsense of a lame duck president refusing to acknowledge his obvious (and fair) defeat.

It's been hard.  I mean, the guy I wanted to win WON!  It's been 16 years since the person I voted for for President actually won the election.  I should be thrilled, right???

I was really hoping that, once it was clear who the winner was (and, let's be real here...it's clear. If you're one of those that actually thinks there was some kind of fraud that is putting Biden in office, I really encourage you to read a book sometime.  And not one written by Mark Levin), that the GOP would start to back up their last 4 years of garbage.  The last 4 years of bending over to the bully that beat them.

But, nope.  That is not happening.  In fact, many of them are doubling down.

Remember how much we loved Rudy in 2012?  He was "America's Mayor!"  He could have gone down in history as the greatest and most loved Mayor ever.  Sure, he had faults.  Sure, there were reasons to criticize.  But, he led us through 9/11.  I remember him appearing on Saturday Night Live as he was leaving the mayor's office.  Tina Fey was there, almost crying, asking him to stay.  That's how bi-partisan the love for Rudy was.

Now...Rudy Giuliani is a mess.  Perhaps I should cut him some slack.  Word is, he is making $20k a day to peddle conspiracy theories and take up taxpayer time and money on a lost (and dangerous) cause.  But, that's not something "America's Mayor" would do.  That's something an asshole would do.

And Lindsey Graham.  I used to have so much respect for this guy.  He and my man Johnny Mac were tight!  Together, they were mavericks!  Bucking their party when the party was being stupid (campaign finance and immigration to name a few).  Now...he's just another Trump toady.  Not only did he chip in money to help Trump fight this completely fair and free election, but now he is potentially facing an ethics investigation for trying to persuade Georgia's Secretary of State to toss out legally cast votes.  This former acolyte of the greatest statesman of my generation is purposely trying to disenfranchise voters.

And then there is Michigan. The home of my ancestors!  Where the Wayne County canvassing board is intentionally made up of 2 Republicans and 2 Democrats to ensure it's bi-partisan.  Where the 2 Republican board members voted to NOT certify the counties votes.  AFTER suggesting they would certify the votes of all the cities EXCEPT Detroit.  Did you know that Detroit has the largest percentage of black voters in America?  Oh, well now you do.  And two white Republican canvassers are trying to eliminate their vote because the amount of votes cast doesn't match the voter roles.

(Side note...this happens everywhere. Imagine for a second a group of volunteers, often elderly, juggling voter after voter during a pandemic, restricted to a certain amount of time while the eyes of the world are on them.  Is it really surprising that these don't match?  Another reason to support mail in voting.  But, not a reason to disenfranchise an entire city.)

(Side side note...the canvassers quickly changed their vote after EXTREME public push back only to come back this morning, after a phone call from our lame duck president, to "recuse" their vote.  Good news is they're out of luck).

Anyway, this all continues to depress me.  The dumbification of America continues.  Somewhere, at some point, Americans got stupid.  It's not just the right.  There are a TON of dummies on the left.  Dummies that boycott JK Rowling for having an opinion.  Dummies that want to cancel Chris Pratt because something he liked on Twitter MIGHT imply that he voted for Trump.  Dummies that think it's actually a good idea to shut down our police departments.

But, here's the thing about the current GOP.  They have given in to their dummies.  You can cry all you want about how liberal the Democrat party is.  But, they elected Biden.  They didn't elect Bernie or Warren.  And, as much as you want to cry about how Kamala is the most liberal senator based on her less than 1 term in a Republican Senate, it's simply not the case.  What is the case is that Republicans, the party of Lincoln, Teddy Roosevelt, Ike, and Reagan are ok with undermining our democracy.  They are ok with casting doubt on our election systems.  Decades of gerrymandering haven't worked, so now they're trying the courts.  And THANK GOD our courts are throwing them out.  Checks and Balances ARE working.  At least for now.

I stopped calling myself a Republican when Trump won the nomination in 2016.  I said that I refuse to be part of a party that promotes a person like this as it's leader.  It's not who I am, it's not what I stand for and I won't be part of it.  I've been holding out hope that they would swing back.  Swing back to the party that nominated John McCain and Mitt Romney.  Before the Tea Party had claws.  Before InfoWars and QAnon.

I was having socially distanced beers with a buddy last week.  He asked, "When did things change?  When did people just start accepting things because someone said so?"  I don't know the answer.  When did bile from a reality TV star become more important than science?  When did the ego of a thrice married womanizer become more important than our electoral process?  When did we start accepting the word of a serial liar?  For real.  I don't know.  I try to have intelligent conversations with people I think are intelligent only to find they have swallowed every last drop of what has been fed to them.  Without question.

Well, keep sucking, GOP.  It might be time for you to go and just enjoy your cult while the big kids figure out how to fix our country. 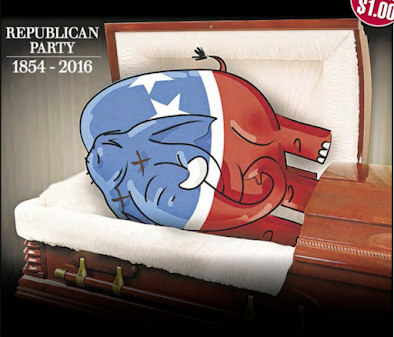