Time to be jealous of me...I met Werid Al!


I have been to many concerts.  Some better than others.  But, only two have brought tears to my eyes.

The first...Sir Paul McCartney.  It was unexpected.  I was excited to see him, sure.  But, 30 seconds into his first song (8 Days a Week), I had an epiphany.  I was singing a Beatles song WITH A BEATLE!  It gave me the cries.

The second...2 weeks ago.  When I saw Weird Al Yankovic!

Ok, I jest.  However, Weird Al has easily been the most constant artist in my life since I was about 8 years old.  That's when my dad handed me a cassette tape (remember those?).  I'm not sure where he got it, but it was not an original album...it was recorded from another tape.  On one side was the Greatest Hits of Blondie.  On the other was the Album "Dare to Be Stupid" by Weird Al.  Notable songs on this album are "Like a Surgeon" a parody of "Like a Virgin" by Madonna, "Girls Just Wanna Have Lunch" a parody of "Girls Just Wanna Have Fun" by Cindy Lauper, and "Yoda" a parody of "Lola" by some band.

Not as famous on the album, but songs I still loved were Weird Al originals!  The song "Dare to Be Stupid", "Slime Creatures from Outer Space" and "One More Minute."

In 1988, I got my first actual, original album.  Even Worse.  With songs like Fat, from Bad by Michael Jackson, "I Think I'm a Clone Now" from "I Think We're Alone Now" made famous by Tiffany (remember her?), and "Lasagna" from "La Bamba."  Not to mention "Melanie" and "Stuck In a Closet With Vanna White", a couple of my favorite Weird Al Originals.

Speaking of originals...most people know Weird Al for his parodies.  But, he actually has an entire collection of originals!  Typically, at least half of the songs on any given album are original songs by Weird Al.  These were never on the radio (that I know of) and rarely received a music video treatment (Dare to Be Stupid being the only exception I can think of off the top of my head...at least until his most recent album in which he did videos for almost all of the songs).

However, this particular Weird Al concert was ONLY Weird Al originals.  He and his band sat on stools, Unplugged Style and played 2 hours worth of Weird Al original songs.  As a person who has LOVED, LOVED, LOVED the likes of "Biggest Ball of Twine in Minnesota" and "My Baby's In Love With Eddie Vedder" and "Hardware Store" even more than I loved "Eat it" or "White and Nerdy," this was an amazing concert for me.

Yes, yes...I know I am geeking out here.  But, seriously...this is 3 decades of music that I have loved.
And, to top it all off...my homie Andy and I were able to meet Weird Al after the show.  I mean, it was a total formal session.  Get in, say Hi, get your picture and autograph and get out.  But, during that 20 seconds, I was able to shake his hand, say Thanks for doing this concert and let him know that I have been a fan for 30 years.  If you ever watch an interview with Weird Al, you'll see that he is just a bit awkward.  I suspect he is a rather humble person.  I mean, he was a nerd in school.  He plays the accordion.  I imagine he never suspected he would be getting a star on the Walk of Fame in his 50s.  He gave a small bow, said "Thank you...we hope to do more of them if enough people like it."  and then turned for the photo.

I give you said photo:

Kim and I went to see Pearl Jam in a HUGE concert at Safeco Field a few weeks later.  It was maybe half as good as the Weird Al concert.

Lastly...apparently Desmond has discovered a love for Weird Al.  He was bummed that I didn't take him to this concert.  I said, "I didn't know you even liked Weird Al." 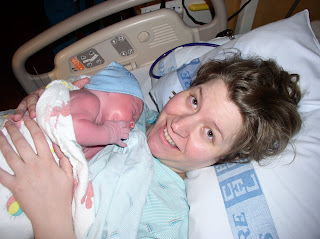