The worst smell I ever smelled

I still remember the worst smell I ever smelled.

It was from boot camp.  Long long ago.

All the new sailors arrived in Chicago at different times.  We basically had to wait around the airport until everyone else arrived.  That took pretty much the rest of the day.  Once everyone arrived, we headed to Naval Station Great Lakes.  We did a bunch of administrative stuff, got our uniforms, heard some rules and regulations and went to bed around midnight.

Finally, before dinner, we headed back to the barracks and we were told to shower.  All of us.  We all go into the bathroom and get undressed to clean up.  There were probably 20 of us.  20 dudes who have been working out all day, traveling the day before and haven't showered in at least 48 hours.  Butt naked (emphasis on BUTTS).  In one bathroom (much like a high school locker room without the lockers).  No ventilation.

It smelled.SO.BAD!  Like, some of us were literally gagging.  We were laughing about it.  It was pretty damn funny.  But, man...it smelled horrible!  Think of all the places that get smelly on one's body, multiply that times the hours of physical activity, multiplied by 20 naked dudes.

Got that smell in your mind?

Ok, now I have something worse.  For the first time, my brain can barely remember that boot camp smell because it has something new.

Imagine a small outdoor garbage can. You know the one.  Where you throw all your house garbage.  Ours isn't too big because we're such awesome recyclers and composters.  On average, we probably put one bag of garbage per week in there.  Until Owen came along.  Now, it's one bag of garbage and about 3 or 4 bags of dirty diapers.

Now...imagine going out to that garbage can just before garbage day to throw some last minute items in before putting the can on the curb.  Imagine that at least one bag of dirty diapers has been in there for 6 days.  Then, imagine other bags of dirty diapers being put in there as the week progresses.

This is the new Worst Smell I Have Ever Smelled!!! 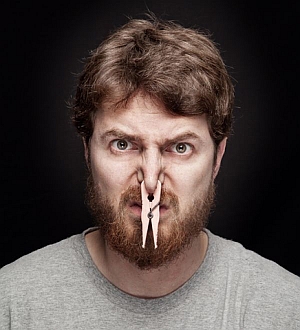 Email ThisBlogThis!Share to TwitterShare to FacebookShare to Pinterest
Labels: Life with a kid, Once Upon a Time, Owen