Will you see the Ender's Game movie 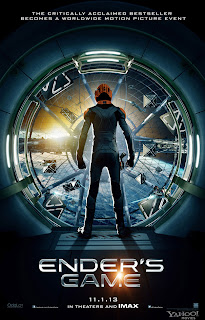 So...if you've talked to me about books, you know that Ender's Game is my favorite book of all time.

My dad handed it to me in the 8th grade.  I refused to read it because I didn't like to read.  I liked comic books and watching TV.  I was dumb like that.

Finally (and, for the life of me, I can't remember why I changed my mind), I read it when I was a Junior in High School.  I fell in love.  I'm reading a book right now called "The Shadow of the Wind."  In it, there is a quote.  "Few things leave a deeper mark on the reader, than the first book that finds its way to his heart."  For me, this book is Ender's Game.

I read a lot now.  Ender's Game is what made me a reader.

Anywhoo...I could write about Ender's Game forever.  How the second book, Speaker for the Dead, was equally as good, but in a different way.  How the 3rd in the series was good not great and how the 4th felt like the author (Orson Scott Card) couldn't figure out how to properly end it, so he started writing gibberish.  Oh, then, I could write about how every single book since in the Ender universe was a pile of steamy horse crap written simply to make money off of the only character he was widely known for.

I digress.  Orson Scott Card is a Mormon.  He has never hidden this. In fact, he's pretty open about it.  Logically, one could therefore assume that he opposes gay marriage.  I don't read much of what he has to say outside of his books because, frankly, I don't care.  And...I'm still mad at him for ruining my favorite character of all time.  It wasn't until recently, now that an Ender's Game movie is in the can for November release, that I have been made aware of just how anti-gay marriage this dude really is.

He's not just against gay marriage for the same bullshit, but sometimes misguidedly logical, reasons your standard Republican homophobe is.  He's is downright "overthrow the government" opposed to gay marriage.

But, I do hate intolerance.  I do hate putting people in a lower class because there is something different about them.  And, this is where OSC has crossed the line for me.  Because people with a different lifestyle want the same perks as people with OSC's lifestyle, OSC is advocating revolution.  This is where he moves, for me, from one-hit-wonder-bad-writer-man, to jerk face.

If I think someone is a douche, I will not give them my money.  For example...I have never seen any movie by Roman Polanski because he is a rapist.  I don't care how artsy or moving or whatever these movies are.  I refuse to give my money to a rapist.  I don't see anything Mel Gibson is involved in anymore because he is a woman beating anti-Semite.  He doesn't get my money either.

But, damn...I LOVE this freakin' book!  For a long time now, I have envisioned seeing the movie.  Putting faces to beloved characters.  I've been wondering how the Battle Room can be brought to life with it's Zero-Gee fight scenes.  I so want to see Bonzo's eyes roll into the back of his head as Ender delivers a deadly blow to the crotch (oops...sorry.  Spoiler alert).  This book could very well be described as having changed my life (thanks, Dad!).

An option I am considering...getting a less-than-legal downloaded copy from my buddy who hasn't paid for a movie in years.  I am typically morally opposed to this avenue.  But, I am also morally opposed to giving money to bigots.

I have until November to figure this out.  Any philosophical advice???