New York City! (get a rope)

Just got back yesterday from my very first trip EVAH to New York City.  Took Kim with me.  Primarily, I brought Kim along because it was her 40th birthday and I thought it would be rude of me to leave her behind while I was enjoying myself in the Big Apple.

You are going to get 3 posts out of this trip.  The first is this one!  A basic run down of our trip.  The 2nd is my review of Aladdin, our first official Broadway show!  Finally, a ranting piece on how annoying it is when people bring their babies into first class.

So...Kim turned 40.  Months ago (I swear, it wasn't 2 days before her birthday) I started thinking about what to do.  40 is kind of a milestone.  I mean, I know people say 50 is really the new 40 and that you don't really hit middle age until 50.  But, I think that's BS.  I know darn well that I ain't gonna live to see much past 80, even if I make it that far.  So, let's stick with 40 being "Over the hill."
I bounced around a couple ideas.  Either, throw a big party in Seattle.  Maybe rent out a dinner cruise or a winery or something.  Or, maybe a fun trip somewhere.  Hawaii, again?  Europe?

Then, I had to remember that there was a good chance Kim would be pregnant.  Surprise!  That turned out to be true.  So, let's not do anything involving drinking (winery out) or anything that would be too difficult to do pregnant (long trip to Europe or even sitting around pregnant in the sun in Hawaii out).

Hey, neither of us have ever been to NYC.  Let's do that!  We can rely on cabs so we don't have to walk any more than she can handle.  And, everything is pretty darn close.  So, NYC it is.

Fast forward 6 months.  Her tri-cities besties decided to join us.  One of them currently lives in NYC so we also had a rad tour guide.  Here are some pics.

We flew into Newark, NJ.  Immediately on decent, I could tell that New York is just a little bit bigger than Seattle. 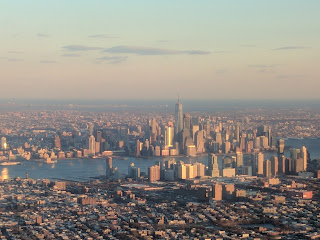 Since there were 5 of us that needed transportation, I figured I would just rent us a car.  That car became a limo.  After a bit, the driver pulled over so we could hit up the liquer store and the 4 non pregnant people could put back a couple bottles of bubbly on the way to the city. 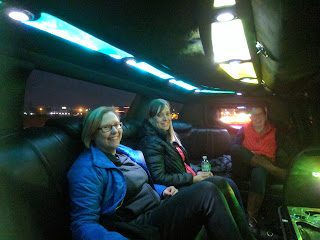 Our first full day, we began by visiting the 9/11 memorial.  Now, I could not get a good shot of this to save my life.  For such a powerful monument, my little phone simply could not do it justice.  Here is one photo, but this scene was so so much more amazing than this crumby picture portrays. 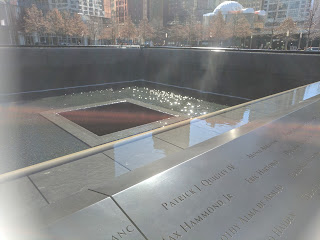 We were discussing the significance of the memorial.  If you haven't seen it, I'll try to describe.  There are two fountains.  One in each of the footprints of the Twin Towers.  There are two layers.  The top layer, waterfalls splash down into the second layer.  From there, there is a square hole.  Water falls over the edge into the hole.

Someone suggested it symbolized the waste of life.  Someone suggested the emptiness left from the attacks.  I suspect it's both of these.  As well as the silence of death.  You couldn't hear the noises from the city in this place.  I admit...I teared up.  I don't believe I have ever teared up at a memorial.  Granted, this is the first tragedy of my lifetime that I have reflected upon at it's memorial.  But, it was very very powerful.

Then, there is the Freedom Tower!  The new World Trade Center.  Wow, what a building. 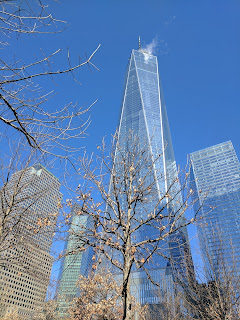 After the World Trade Center, we headed over to 30 Rock to see Jimmy Fallon rehearse his monologue for that night.  Pictures are strictly forbidden!  And, given that it was Kim's dream to make out with Jimmy Fallon, I didn't want to jeopardize their meeting, so I didn't take pictures.  The experience was fun.  Was it worth the hour and a half of standing in line to watch a 15 minute rehearsal...mmmmm, I'm not sure.  Maybe for Kim.  If we had been able to get into the show taping, it would have been worth it.  It was pretty cool to see Fallon.  He seems like he really loves his job.  He gave us a quick history of the Tonight Show and of the studio where it's filmed then went into his jokes.  Most were hilarious.  Some were so so...the best part was watching him strike a line through the ones that didn't get the biggest laughs.

That night, we had dinner at Buddakan.  Apparently, it was on Sex in the City.  Michelle (NYC friend) made us reservations.  I admit, going in, I was a little, "I'm probably going to spend a ton of money and leave hungry."  But, boy was I wrong.  I mean, it wasn't cheap, but it could have been worse.  And I was definitely NOT hungry after.  This place was Bomb!  Highly recommend it if you're in the neighborhood.

Ok, moving on.  Saturday morning, we took a 3 hour tour (just sit right back and you'll hear a tale) of  the Hudson River and New York Harbor.  Here are some pics: 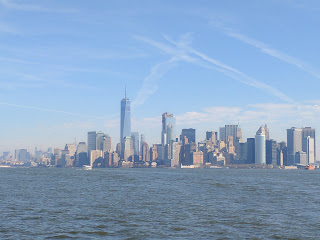 Unfortunately, Kim couldn't see anything because her hair was in her eyes. 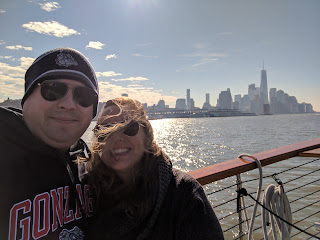 Not sure which lady is prettier, here. 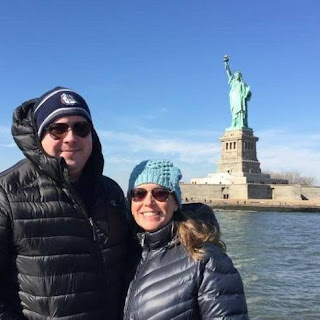 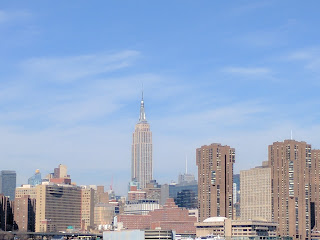 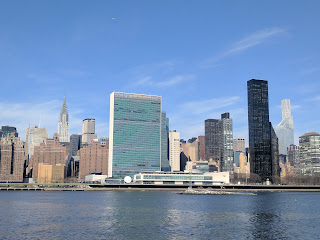 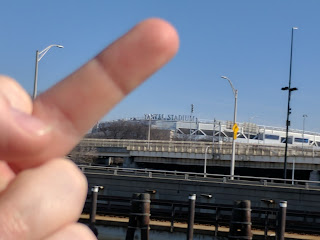 We also saw Ellis Island, tons of bridges, the Bronx, Harlem, Brooklyn, and more stuff.  All while enjoying a 4 course meal and booze!

Hung out in Central Park for a bit after.  And, I managed to only take 1 stupid picture: 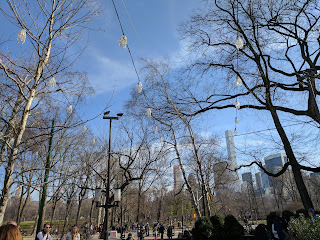 Why did I post this?  I'm not really sure.

But, one of the girls got this one on her phone from the fancy pants overpriced bar at the park: 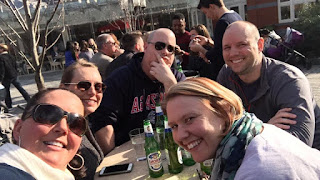 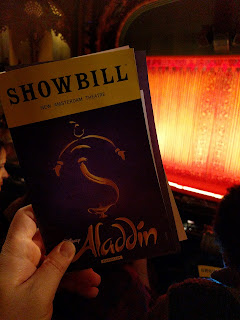 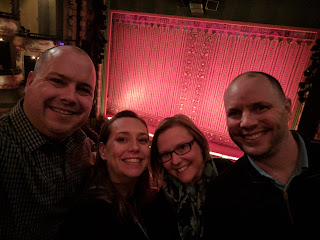 Overall...it was a total blast!  Kim handed it like a champ, despite being 12 months pregnant.  Great food, great sites...LOTS of people.  I had to close my eyes in some of the cab/Uber/Lyft rides because I was convinced we were going to crash or kill someone.  Would totally go again.

Desmond really wants to go.  Very glad he wasn't there on this trip.  Not because I don't love to travel with him.  But, because I got detached from my adult counterparts at times in the crowd.  I would have a panic attack trying not to lose my kid there.  I told him maybe when he graduates 8th grade.  I still remember doing a tour of Washington DC in 8th grade.  Maybe we'll lump the 2 together. 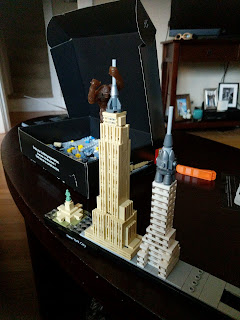 And, I shall close with this adorable picture of my lovely wife and me in Times Square.  Ain't she adorable!!! 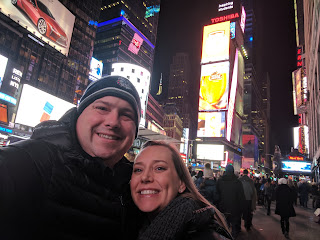