I've been thinking about my next post for a while, now.  But, before I get to that, I should let the 2 people that still read know that we recently lost a family member.

My little kitty, Satchmo Baggins, died a couple weeks ago.

In July-ish, I returned home from a work trip and I couldn't find Satchmo.  Finally, I located her hiding in the upstairs bathtub. The bathtub was gross where she had thrown up, there was a ton of cat fur lying there, and she was very skinny.  I am guessing she was there the majority of the time I was gone.

I could not get her to leave the tub.  I began bringing her food and water, which she would eat.  But, she would only leave to use the litter box.

The vet (I am guessing an on call fill in...I have never seen her before) gave her a once over and couldn't figure anything out.  She received an injection of fluids and some anti-biotics (she had been scratching herself up in a few places) and sent us on our way.

A couple weeks go by.  I finally get Satchmo to leave the bathroom, but she takes claim to a downstairs window sill that she refuses to leave instead.  Shortly after, I start noticing pee around the living room and kitchen.  I immediately think it's Quincy.  It didn't take me long to realize it wasn't.  Satchmo was no longer going upstairs to use the litter box.  So...I bring the litter box downstairs.  This helps, for a little while.  But, again, it's not too long before she stops leaving her window sill altogether.

So...I take her back to the vet.  This time, we got the regular vet.  The regular vet listens to what I'm explaining while feeling Satchmo's insides.  She stops and says, "There's something here."  That's when I knew everything else I was going to hear.  We took an ex ray and ran some tests to confirm.  Satchmo had a tumor.  It was very aggressive.  The vet ran the options down for me.  1) Surgury.  Likely to run around $2000 and not guaranteed to get it all or to even succeed.  2) Chemo.  Also $1500-2000 and also not guaranteed to succeed.  3)  Make her comfortable.

I wonder if Satchmo sensed what was going on at this point, because she began leaving the window to sit with me on the couch. She still wouldn't go upstairs.  I even tried moving her to my bed so she could lay on something more comfortable, but she would always jump off and go back to her window.  So...I started staying down there with her.  She would sleep on my chest the entire night.

Anyway, about 3 weeks ago, she was barely moving at all.  She was so skinny.  She never used the litter box, and even when she did try to go, very little came out.  She wasn't eating or drinking anything.  However...every night she would still lay on my chest and purr.

I took her to the vet, Shaundar met us there, and we said goodbye. 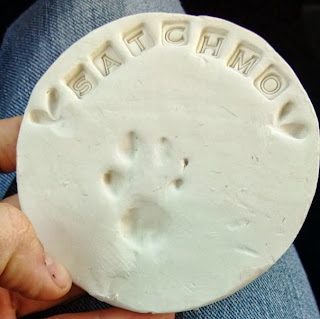 When I picked up her ashes, the vet gave us this little token.  I love our vet.

Anyway...I miss my kitty.  She was a good girl.  She frequently gave dirty looks and she loved to knock the glasses off my dad's face when he visited.  But, she still know how to make me smile by rubbing her face right against mine.  Or how to sit in my lap at just the right time when I was feeling sad or lonely.

In case you're wondering about Desmond.  He misses her, too.  I explained to him what was going to happen the night before.  He became very sad.  He yelled NO at me and told me he didn't want Satchmo to die.  This outburst lasted about 20 seconds before he said, "Daddy...when Satchmo is gone, can I get a pet mouse?"  He will still occasionally tell me he misses her.  But, I think this is simply a set up for the next question, which tends to be, "When are we getting another cat?"

Here is the eulogy I posted for her on Facebook:
Goodbye, Satchmo Baggins. I figured you would outlive me because I was convinced you would either kill me in my sleep or shove me down the stairs. I will miss your dirty looks and our reading time cuddle sessions. Try not to scratch up God's furniture. Love you.

Email ThisBlogThis!Share to TwitterShare to FacebookShare to Pinterest
Labels: Life