Ok...so I have this video game called Injustice: Gods Among Us.  It's basically a fighting game that puts the heroes and villains from the DC universe against each other. 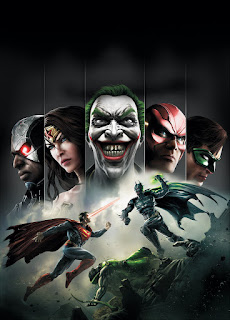 Since it's a fighting game, I don't play it in front of Desi.  However, recently, he saw the box for the game (which looks like the pic to the right) and asked, very nicely, if I would play it so he could watch.

I said No again.

Finally, he asked again very nicely and promised that he would continue to keep his hands to himself at school and be good and not play fight with his friends.  So, I gave in.

I turned on the game and Desi orders me to play as the Flash.  So, I do.

Now, in this game, each super hero has a supermove.  It's more or less a cutscene of them using their super powers to beat up their opponent.  Here is what the Flash's looks like:


In case you can't see it...in a nutshell, the Flash knocks his opponent into the air, then proceeds to run ALL THE WAY AROUND THE ENTIRE WORLD before punching the guy another two times, the last one knocking his opponent to the ground.

After seeing this, Desi proceeds to put on his Flash costume and ask if we can go outside to play guys.

Playing guys typically involves Desi playing a super hero of some sort and me playing a bad guy.  Which bad guy is usually determined by Desi.  In this case, I am told I will be "Slow Man."  Not the kind of villain I expected would be a strong opponent to the Flash.

Anyway...we go outside to play and I record Desi performing the following super move.

Email ThisBlogThis!Share to TwitterShare to FacebookShare to Pinterest
Labels: Life with a kid, Superheroing, Videos

At least he's getting exercise... You could tell that he didn't quite go all the way around the world ;)