Farewell to our Junction Home

I will post pics of the new place soon (hopefully).  We are fully moved in.  With the exception of some remaining unpacked boxes, we are officially living at the new place.

And, with that, we are in the process of saying goodbye to our old home.  Our little Junction home in West Seattle.  It's very bittersweet.  While we weren't there long, it was our first home as a family.  Kim became a Pankow while we lived in this house.  Opie was born.  We made a ton of memories here.

We moved into the house in September of 2014.  Kim and I were dating and had gotten engaged earlier that year.  Desmond was in Kindergarten.  Opie was a twinkle in our eyes.  It started out as a rental.  The lease on the place I was renting was coming up and I needed a new place.  Kim owned her own home, but moving in there wasn't really an option as it was far away from Desmond's school.  So, we started looking.

Rentals in Seattle are not cheap.  Finding a nice place with room for 2 adults and one kid (not to mention a guest room for Grandmas), in a decent location, at a price we wanted was not easy.  We came really really close to renting one place with an AMAZING yard and a SPECTACULAR view of the Puget Sound.  We were one pen stroke away from signing a lease when the fact that it was only 2 bedroom (1 if you didn't count the room that didn't have a closet) and really really dinky made us wise up.

Our home kinda fell into our lap.  Kim was talking to a friend of hers who had another friend who had a brother.  This brother owned a house.  He and his family lived in the house until his job required him to move to California.  Since then, they had been renting out their house.  The previous tenants had jumped ship and they were looking for new ones.

The rent was affordable and the location was amazing.  Central West Seattle near the Junction (essentially, West Seattle's "main street).

It worked out very nicely!  They offered us a great price (one where they made money but we weren't priced out) and we did everything without much hassle.  We were homeowners for the first time as a family!  Yay, us!!!

Well, Desmond got bigger, Owen decided to be born, and the Junction started to grow rapidly in population.  2 years after buying our house (3 years after moving in) we were wondering if we should branch out.  Find something a bit bigger in a neighborhood that's not so crazy.

Here's the hard part...the Seattle market is currently the fastest growing housing market in the US.  This was both good and bad for us.

Bad because, in order to find a good house for us, we needed to look outside of Seattle.  I don't mind leaving the city.  Taxes are high and I think Seattle politicians (and most voters) are dumb.  The problem with this is...we love Desmond's school (in Seattle), we don't want to be too far from Desmond's mom (who lives in Seattle) and our commutes are already long (to Seattle...and Bellevue for Kim).  As I said, I'll talk about the new place in the future, but we are no longer Seattleites.  We now live in Burien.

In 2 years, we installed 2nd bathroom and re-fenced the entire backyard.  We also replaced some appliances, but I don't think that impacted much.  With those additions and the huge growth in Seattle, our house was appraising at $200k more than what we bought it for!  Holy CRAP!

Now, we did things a little backwards.  Our agent was so confident that we would sell our house, that we used this equity to take out a home equity loan to use as our down payment on the new house.  Therefore, you can imagine our stress as we waited for a buyer.  We were looking at potentially having to pay 2 mortgages and a home equity loan payment at the same time.  This right after Kim spent 4 months on unpaid maternity leave.  Not ideal.

We put the house on the market for a week and were set to review offers on a Wednesday.  Come Tuesday night...nothing.  There were some people that had expressed interest.  But, so far...no offers.  I didn't sleep much that night.

But, our agent was right.  Come Wednesday morning, we had 2 offers!  Apparently a third person was interested, but did the math and decided that she couldn't afford the payments.  But it turns out that 2 offers was enough.  They competed with each other enough to bump the price up $45k over our list price.  So, if you're doing the math...in 2 years, we made $230k.  Minus the cost of the bathroom and the fence.  But, still...a significant profit!  It is a GREAT time to be a homeowner in Seattle.

(I apologize if this is braggy...but, I figure it's all pretty public.  All you have to do is pull up Zillow in a few weeks.)

Now, before you get too excited, we have to pay back that home equity loan, plus agent fees and money to other folks it's owed to (stagers, repairman, credit cards that we had to use while we were broke during this process, etc).  So, the money we are actually pocketing is not as great as it originally appears.  But...it's still pretty great.

Anyway, it's a very happy time for us, but we will miss our old house.  It gave us a home for 3 great years.  Now, it will be home to another family.  I hope they enjoy the plums, Horatio the Squirrel, the new bathroom, Happy Hour at Shadowland, songs emanating from Jeffrey's living room, the kids up the street passing by on their bikes, Ercolini Park, Fairy Land (if they can find it), and the general warmth that comes from the home.  A place that has seen so many families come and go and has kept them all sheltered and warm. 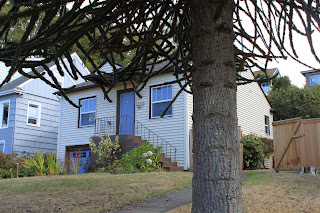 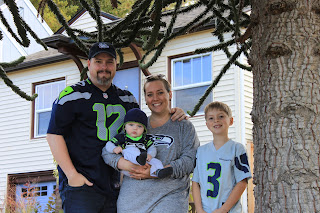 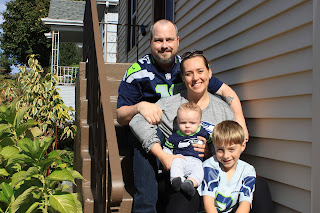 
The scene: Early Evening.  I am in the shower.  The bathroom door is a sliding barn door.  It does not lock.  Owen barges in...a common occurrence.

Time to be jealous of me...I met Werid Al!

Ok...because you deserve it...I am going to complete this post.  Enjoy!


I have been to many concerts.  Some better than others.  But, only two have brought tears to my eyes.

The first...Sir Paul McCartney.  It was unexpected.  I was excited to see him, sure.  But, 30 seconds into his first song (8 Days a Week), I had an epiphany.  I was singing a Beatles song WITH A BEATLE!  It gave me the cries.

The second...2 weeks ago.  When I saw Weird Al Yankovic!

Ok, I jest.  However, Weird Al has easily been the most constant artist in my life since I was about 8 years old.  That's when my dad handed me a cassette tape (remember those?).  I'm not sure where he got it, but it was not an original album...it was recorded from another tape.  On one side was the Greatest Hits of Blondie.  On the other was the Album "Dare to Be Stupid" by…
Read more