Desmond wrapped up the school year earlier this week.  My oldest little dude is rapidly becoming not so little.

This was a good year, I think.  Desmond's teacher, Ms. Hoch, was just what he needed.  Kind and loving with just the right amount of kick you in the pants when you're out of line.

The beginning of the year started a bit rough for Des.  Multiple card changes (the equivalent of getting your name on the board followed by a check or two when we were kids) and we got a few not fun notes home from Ms. Hoch.

But, he turned things around!  We've been getting fell greens the vast majority of the time since January.  He still slips up here and there, but it's usually more about not paying attention than keeping his hands to himself, now.

Top this off with good grades and exceptional MAPS test scores (outscoring the district and national averages by considerable margins...brag alert!), and the kid makes us proud.

But, that's not all!  Second grade is a big year for little Catholics, too.  This was the year Desmond made both his first Reconciliation and his First Communion! 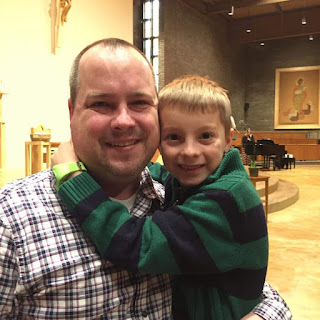 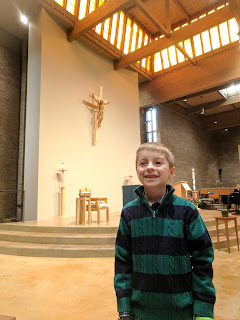 I don't recall if I posted about this, but there are a couple pics for you.  He was a bit scared going in, but he confessed those sins like a champ!

Then there was First Communion.  He looked so sharp!  Shaundar, Kim and I all walked up with him as he received his First Communion from Fr. Jack.  It was a very proud moment for me as a Catholic dad.