Last week, Desmond and I went to Seahawks Training Camp to watch the Hawks practice!  We went with our buddies Duncan and Duncan's dad, Kevin. 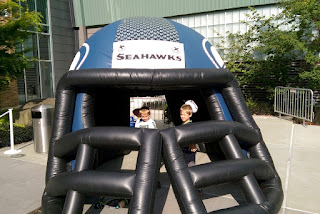 So...there is a story with this pic.  At some point, when we were talking about training camp, Kim made a joke about how Des was supposed to make sure I didn't run off with a cheerleader, or something like that.  I don't totally remember.  I just remember Kim saying something about keeping me away from cheerleaders.  So...when I tried to get Desmond to take a picture with me and the SeaGals, he refused.  "Kim said No!"  Later, he was like, "Why did you want to have your picture taken with the SeaGals so badly?"
﻿ 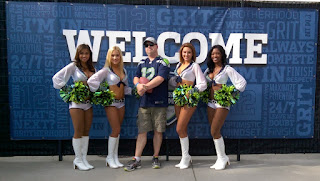 No reluctance to have his picture taken with Blitz.﻿ 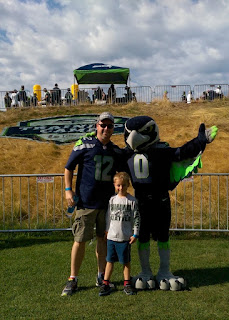 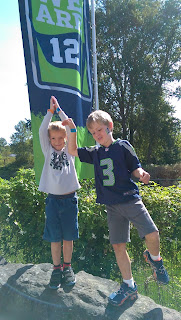 Autograph time sucked.  So much pushing and shoving.  Desmond doesn't like crowds to begin with. ﻿ 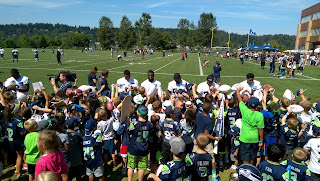 Then...it got worse when Russell Wilson came over.  See that arrow?  That Desmond.  He didn't get any autographs.  And, in the process, he got smashed into the other kids. 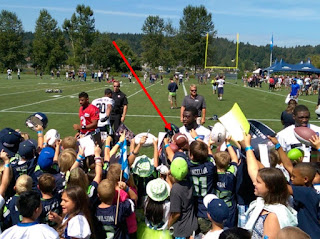 I didn't want him to leave without any autographs, so I made sure he got at least 1.  You can see just how impressed he is by it.  In case you can't tell, this is his, "Seriously, Dad?" face. ﻿ 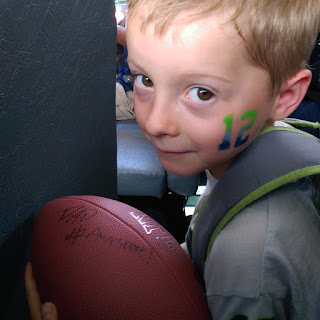